We are pleased to provide you with a Media Measurement report with audience statistics on Top TV Stations and Top Radio Stations for Quarter 2 2017 in Tanzania, where the  GeoPoll Media Measurement service is currently available . 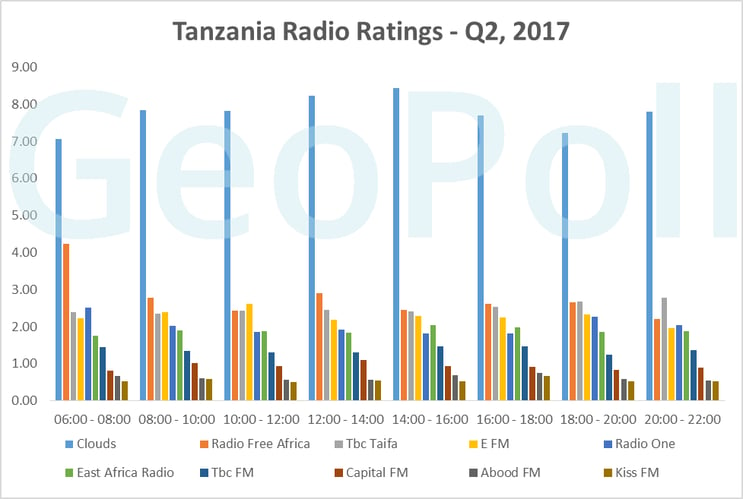 Clouds has the highest radio ratings throughout the day in Q2. Its highest point lies between 2-4PM with an average of 8.43.  There is a stiff competition amongst the other radio stations.

According to the table below, there is a great difference between Clouds radio station which takes the lead in share with 23% and Radio Free Africa which is the second with a share of 8.2%. Tbc Taifa has the third highest share of 7.4%. People listening to other stations outside the top 10, which broadcast across the country at a regional level, account for the remaining 32.6% share.

The highest percentage of other indicates a large number of radio stations in Tanzania which broadcast at a regional level.

GeoPoll has analyzed the top 10 TV stations at the national level in Tanzania for Q2 2017 using the daily data collected through its Media Measurement Service. Both ratings and share for the top stations in Tanzania are examined.

The chart below shows the average ratings for the top 10 stations in Tanzania during peak hours i.e. from 19:00 to 21:30. 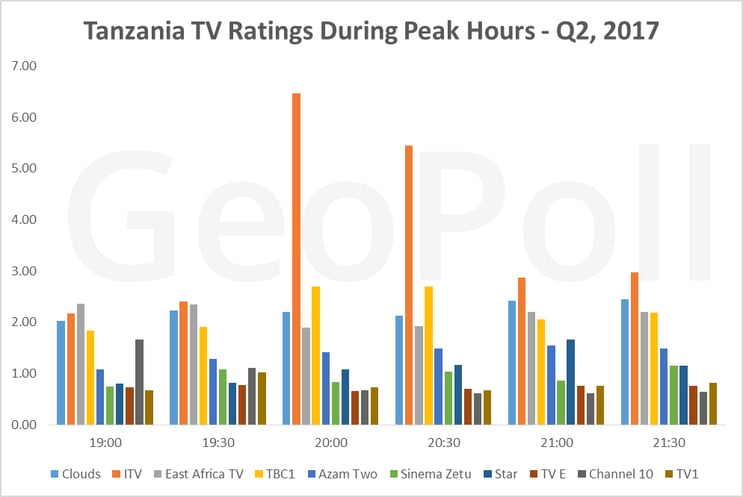 ITV has the clear top spot in ratings between 8-9PM, with more than twice the ratings of the nearest competitor. There is a stiff competition amongst the other TV stations during peak hours.

The high share % for other stations outside the top 10 indicates the large number of TV stations in Tanzania which broadcast across the country at a regional level.