We are pleased to provide you with a Media Measurement report with audience statistics on Top TV Stations and Top Radio Stations for Quarter 2 2017 (April - June) in Nigeria, where the GeoPoll Media Measurement service is currently available. 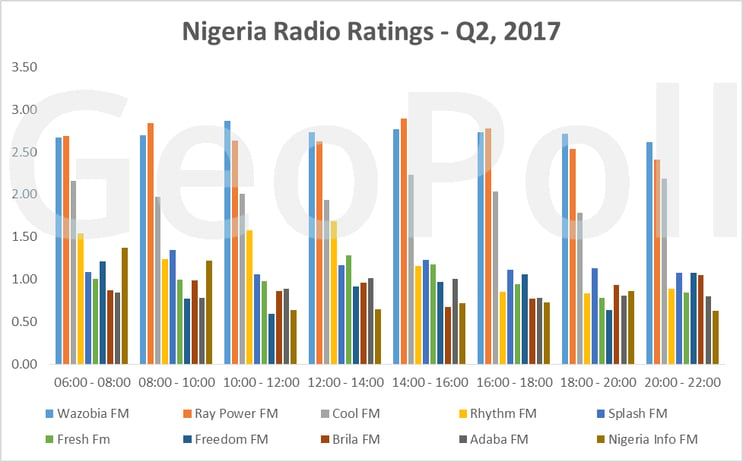 From the top 10 radio stations in Nigeria, Wazobia takes the highest audience share of 8.4% followed by Ray Power FM with 8.3% then Cool FM with 6.3%. 55.8% audience share goes to stations outside the top 10 most of which broadcast at a regional level.

The high share % for other stations outside the top 10 indicates the large number of radio stations in Nigeria, which broadcast across the country at a regional level.

GeoPoll has analyzed the top 10 TV stations at the national level in Nigeria for Q2 2017 using the daily data collected through its Media Measurement Service. Both ratings and share for the top stations in Nigeria are examined.

The chart below shows the average ratings for the top 10 stations in Nigeria during peak hours i.e. from 19:00 to 21:30. 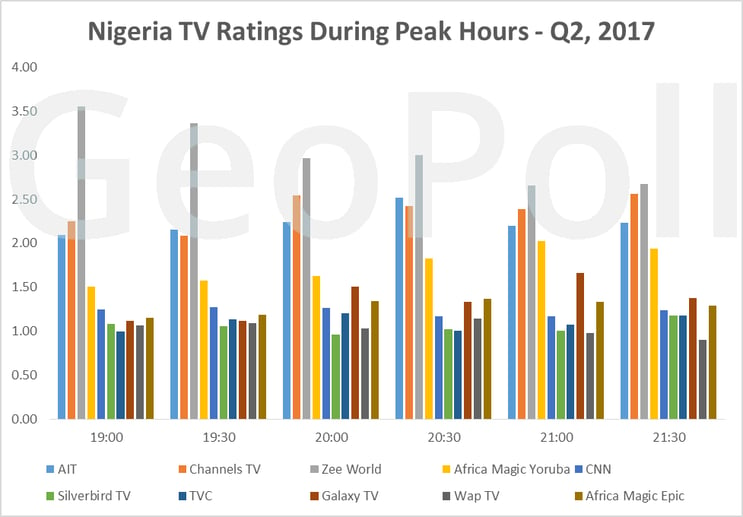 Zee World consistently is the leading station in ratings during peak hours at the national level. Its highest point lies at 7PM with an average of 3.55. There is a stiff competition between AIT and Channels TV for the second position in ratings. The highest average ratings for AIT is 2.52 while for Channels TV is 2.54 both during primetime.

AIT manages to get the highest spot with a share of 9.5% followed by Channels TV with 9.4% then Zee World with 8.9%. Africa Magic Yoruba takes the fourth spot.

Questions on NTA viewership are asked at the regional level for each state, and the ratings for each individual NTA station are combined to account for a large percentage of the ‘Other’ stations outside of the top 10.